CERN turns 60 and the value of basic research

Posted on September 8 2014 by Jerry Mahoney

On Sept. 29, CERN will mark its 60th anniversary, celebrating “60 years of science for peace.” CERN (European Organization for Nuclear Research) is perhaps the world’s most prominent monument to basic research and is famously the home of Large Hadron Collider (LHC), which discovered, or proved the existence of, the Higgs boson in 2012.

It was a major event in the often-quiet world of basic research. More than two-dozen countries have poured $9 billion or so (nearly 7 million euros) into the particle accelerator more than 30 meters underneath Geneva and the surrounds. While that’s a lot of money, quick payoffs are not expected in basic research, and for some that may provide an element of controversy.

“Basic research, the attempt to understand the fundamental principles of science, is so risky, in fact, that only the federal government is willing to keep pouring money into it,” the New York Times reported in 2010. “It is a venture that produces far fewer hits than misses.”

Yet sometimes the hits expand humanity’s understanding of the big questions that go beyond the day to day, and these results may eventually impact our daily lives.

Sean Carroll, a theoretical physicist at the California Institute of Technology, notes in his book about the discovery of the Higgs, “The Particle at the End of the Universe,” that quantum mechanics was a relatively abstract field in the early decades of the 20th century. But it led to the development of transistors, lasers, superconductivity, light-emitting diodes and nuclear power.

Carroll’s book tells the story of the LHC and the efforts of thousands of scientists that led to the discovery. In 2013, the book won the UK’s Royal Society Winton Prize for Science books, and was named best science book of the year by The Guardian, Financial Times and New Scientist.

He counts the Higgs boson detection among the most significant scientific discoveries of the past century.

For much of the 20th century, scientists thought the universe was made of atoms and their protons, neutrons and electrons. We now know there’s more to protons and neutrons, subatomic particles like quarks, leptons and bosons: 12 elementary particles in total that make up the Standard Model of particle physics.

By validating a theory proposed by the British scientist Peter Higgs and others in the 1960s, the Higgs boson discovery puts a finishing touch on the Standard Model, which explains what the universe is made of and more or less how it works. It helps scientists understand the four forces that govern the particles: gravity, electromagnetism and the strong and weak nuclear forces.

“Its field fills space, breaks symmetries, gives mass and individuality to the other particles in the Standard Model,” Carroll writes of the Higgs. “If the Higgs boson didn’t exist, the universe would be an utterly different place.”

That is one basic takeaway from Carroll’s book: discovery of the Higgs boson is important because it confirms the existence of the Higgs field, which gives particles mass.

Quantum field theory and the meaning of life

Carroll uses the particles-and-fields dichotomy – an essential aspect of particle physics – to state what he calls a neglected truth: fields matter more. Scientists just see particles when they zero in on fields. “It’s a fact of physics that all the different particles really arise out of fields – that’s quantum field theory, the underlying framework for everything that particle physicists do.” Here’s a link to a lively Carroll presentation at the Royal Institution about the Higgs discovery and other milestones of particle physics research, including quantum field theory and how it can simplify our understanding of daily life on Earth.

Carroll says the LHC “represents a new era in physics, smashing together particles with an energy never before achieved by humankind.” The accelerator is preparing for its second three-year run, to begin in 2015.

But there may be competition to be the source of the next big discoveries involving microcosmic particles and the still-hidden nature of the universe. Despite its cost, basic research is regarded as a priority for many countries.

The Chinese are planning to build a ‘Higgs factory’ by 2028, on their way to a next-generation super collider. Discussions about super colliders, envisioned for the mid-2030s, also are underway in the U.S. and Europe.

Posted on December 2 2013 by Thomas Bacon

Welcome to Mahoney Lyle, an integrated marketing communication agency serving tech clients on both sides of the Atlantic.

While our name is new, our team has worked together for 10 years, providing a variety of services to companies and organizations in the U.S. technology centers of Silicon Valley, Austin and New England, as well as France, Germany, Sweden, The Netherlands, Ireland and Switzerland.

We continue to work with clients, editors and analysts that we’ve known for many years.

We like to think that this good fortune stems from a straightforward business philosophy that each of us has cultivated in our careers: bring a skillful, open, hard- working approach to everything we do, and use effective communications techniques to strengthen our customers’ enterprises.

It may not be the flashiest approach. But we like it, and we think you will too.

Posted on December 2 2013 by Thomas Bacon

In November, the European Space Agency launched three identical research satellites into separate orbits to provide scientists with unprecedented data about the Earth’s magnetic field, which shields the planet from cosmic radiation and harmful charged particles in the solar wind.

The four-year Swarm mission will beam back information about the sources of the field, why it seems to be weakening and what might be in store for our planet. On board each of the satellites is CEA-Leti’s absolute scalar magnetometer (ASM) technology; its ability to measure the magnetic field from three different locations and time zones is a central to the mission’s success.

Congratulations to Leti, which has been producing innovations that improve life on Earth for more than four decades.

Posted on December 1 2013 by Thomas Bacon

Less than a year in business and we’ve already moved to a bigger headquarters! 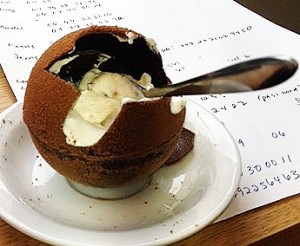 The chance to set up shop in bigger, brighter Versailles digs came our way at an opportune moment, providing us with more desk space and a bigger conference room. Plus, we have a view of a beautiful old chapel, and great neighbors – especially the caterer one floor below. K-Traiteur, who brings us outstanding pastries and dishes to sample, would be an excellent choice for a reception, wedding or other event.

It has been a busy year, one in which we’ve gained firsthand insights into the challenges of a startup – balancing business demands and organization-building and meetings with bankers, accountants, IT guys and government agencies (some paperwork required).